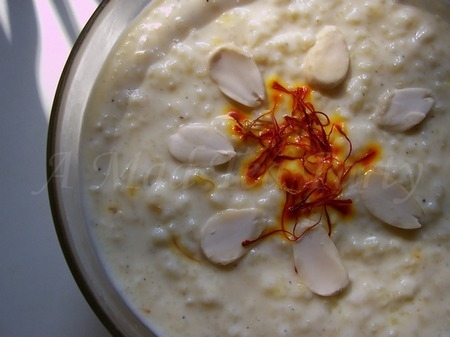 Well, as I was saying (paraphrasing Ammini) “Much is made of rice in Kashmir.” It is the staple at meal times, naturally. For most ‘holy’ days and special days like birthdays, as also to mark new beginnings, we make taher (soft ta – her) – rice cooked with turmeric and mixed with salt and heated mustard oil as naveed (prasad); more delicious than you may think. Any function in the family – weddings, yagnopavit (the thread ceremony) – the bua or maasi (aunts) will make ver, a risotto like preparation in which rice is spiced with caraway seeds, heeng, and vari-masala, and creamed with the gradual addition of water and mustard oil (what else!), quite the olive oil to us. There will be walnuts added, or in the non-vegetarian avtar, chichir (bits of, ahem, intestine). While modur polav is usually served at weddings, the sweet at other less-extra-ordinary occasions is the Kheer.

Now, this is again where Kashmiris are at loggerheads with Maharashtrians. Maharashtrians serve rice kheer only for shraddha! And we think the(ir) sevian (vermicelli) kheer is nothing to write home about (no relation of the muslim seviyan, mind you, which is an altogether different delicious animal). We serve rice first on our thali which then receives all the gravied dishes – katori being used only to serve yoghurt. On a Maharashtrian thali, rice is served last; except, again, when observing a shraddha. If they serve the rice to the front of the thali, we serve it on the other end away from you, and you bring forward, a little at a time, mix it how you want and eat. They serve a dainty handful, we upturn an entire bowl-full. Yet the twain has met!

And guess what I must have made when I decided to showoff my culinary skills in the dessert section? In all fairness to the in-laws, they didn’t mention the taboo till much later. By then, they didn’t care for it anyway. The taboo, not the Kheer! The kheer was a hit, and I have converted many a Maharashtrian since. When it was my FIL’s 75th birthday celebration, I suggested rasmalai for dessert. My MIL looked at me not quite understanding what had come over me. Birthday, 75th, Maharashtrian people, and rice kheer, surely not? But rice kheer it was. Without the addition of “a spoonful of rava” for “shastra”, as suggested by that well-meaning friend of hers. In which case, technically, it would be saved from being kheer. She pulled me aside in the kitchen and said, “Make it as you always do.” This was her best friend! My MIL never made her gavha chi kheer (wheat kheer – you call that kheer?) after tasting my kheer. So, there.

This is how I, a Kashmiri daughter-in-law, gained renown in the Maharashtrian circle as a maker of terrific desserts (plural just sounds better 🙂 ) with my repertoire of two desserts. The remaining Kashmiri desserts (one and a half) I have never needed to prepare. But I promise to, for the sake of my readers’ curiosity.

There are kheers, and then there is my kheer. I have worked on this recipe a lot. This is A Mad Tea Party original. I have tried every trick there is in the trade – added sooji, used cooked mashed rice, and many such blasphemous short cuts to get to the creamy kheer of my dreams. I came upon that in the kitchen of my uncle who is a household name, in small town Raton (NM). I was visiting him from Denver. And he made, you guessed it, kheer. This was what kheer could be: the perfect marriage of rice and milk cooked to a delicate creaminess. It would still take me a couple of attempts before I had my recipe.

The best part is, it is not hard work either. When I made it for Navreh/ Gudi Padva two days ago, it took all of 45 minutes. And I didn’t need to stir like crazy either – just the last 5 or 10 min. This time I used my pressure cooker instead of my regular, way thinner, aluminium pan and I didn’t need to worry about the milk scorching at all! Live and learn. So, first, find a heavy bottom pan and you’re in business. The rest is just a love affair between the milk and the rice. Second, it is important to pre-soak the rice. This will help it cook before the milk gets too concentrated to allow further cooking. That happened to me once, and I actually had to add water to let my rice cook properly! And third, use milk and rice in the given proportion. Use any milk, as long as it is 2% or richer.

If you are going for the true Kashmiri version, add slivers of copra (dry coconut) and raisins. Sometimes I do, sometimes I don’t. But almonds, always. As well as saffron. 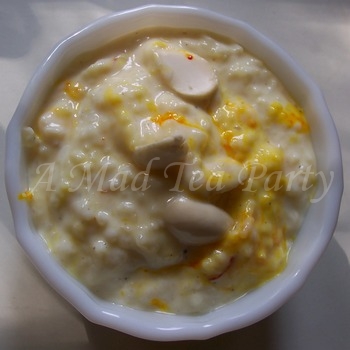 Soak rice in water for an hour. Drain. In a heavy bottom pan, such as your aluminium pressure cooker bottom, pour in 2 litres of milk and the drained rice. Bring to a boil. 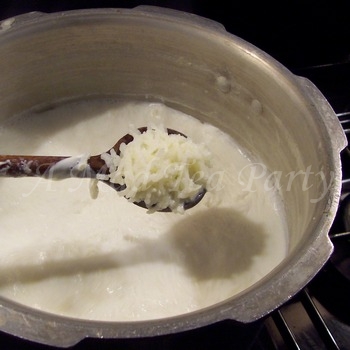 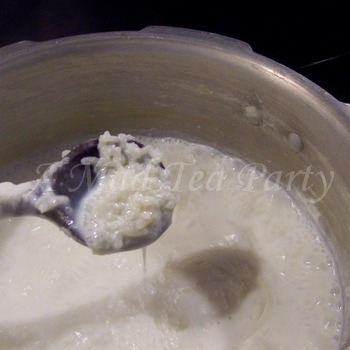 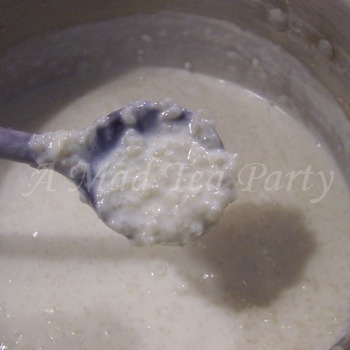 Reduce the heat to the minimum needed to keep it on a rolling boil. Leave a wooden spoon in; it will prevent the milk from boiling over. If you are using a heavy bottom pan you’ll be fine and not need to stir all the time, maybe once in 5 min. This was the first time I used my cooker for this, and I have never been happier. Busy yourself with other things you need to do in the kitchen; just keep an eye on the boiling milk. I would advise against using a shallow wider pan in which the milk may thicken too soon. The rice will be cooked in about 20 min, and start to break up in another 10. After nearly 35-40 min of cooking, now is the time to reduce the heat some and stir continuously for the next 5-7 min. The rice will have disintegrated into a creamy kheer. That’s it. Kheer is almost done. Turn the heat off. Add sugar, the other ingredients from the list and stir. Chill in the refrigerator and serve. It will thicken as it cools.

I like to leave my saffron in as strands and not stir too much. I like the shades of cream to bright orange in my kheer later.

Cut down on the sugar as much as you want. Try a spoonful without. If this is not the last word on Kheer, what is?

With lots of hugs to my pal, Manisha. 🙂

48 thoughts on “The Last Word on Kheer” 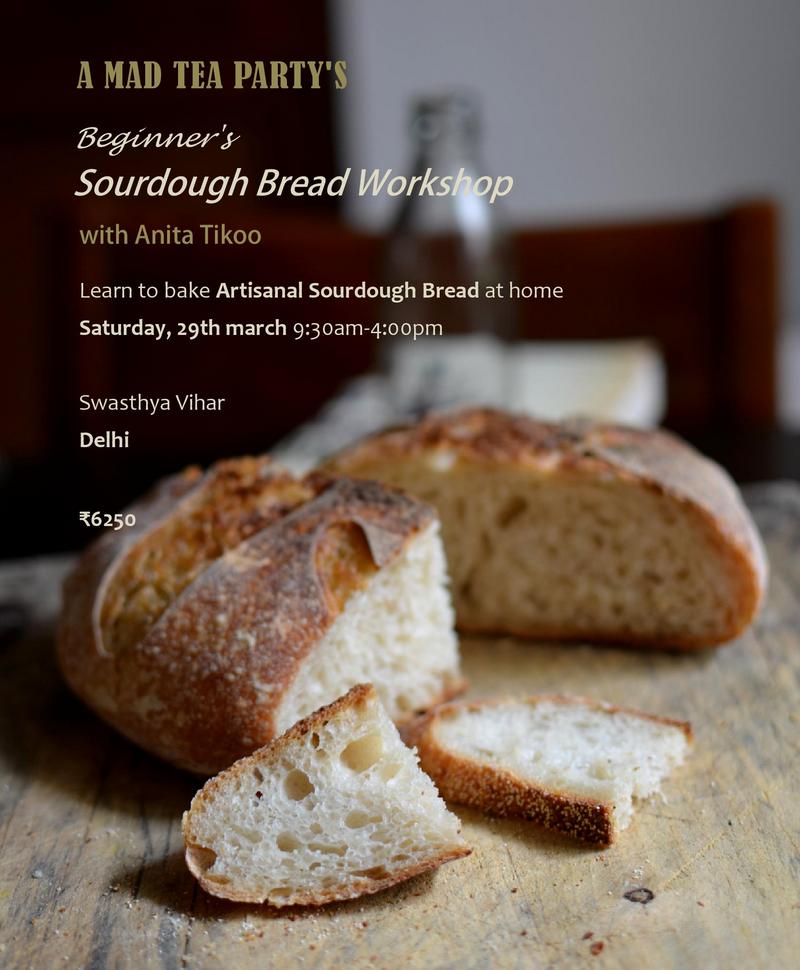 Bread Desserts Drinks Eating Out From the Garden Kashmiri Low Fat on the side Potatoes Preserves Punjab Ruminations and rants south Indian Tea Party This and That Traditions and Customs Travel Under 30 min! Vegetables Vegetarian
Pulav, kadhi, pickle. . Earlier this week I started out to make a quick tehri for lunch only to remember I had scrap stock that I must use. This batch of stock had had beetroot tops and tails in the mix and was a deep red in colour. Tehri out, pulao in. I dug out the tiny carrots (from the fridge!). The vegetables were browned on medium heat and cooked with rice into an aromatic pulao. Paired with kadhi it made for a fabulous lunch. . Pulao Recipe: Add 1/2 tsp zeera to hot mustard oil and then proceed to caramelize one onion, one potato, and a few of the aforementioned carrots (all thin sliced) on medium heat. This will take a good 10 minutes; don't rush. Add drained rice and saute for a minute. Add the stock, season with a little salt, and bring to boil. Add 1/4 tsp of homemade garam masala. Cover and cook for 10 min. Let rest 10min before fluffing. . Serve with (Kulfey ki) kadhi (recipe in feed). On the side we ate the quick cucumber kimchi (recipe deep down in the feed) from last weekend's pickling workshop - just the thing to add that piquant crunch. . . . #pulao #tehri #ricefordinner #simplemeals #kadhichawal #riceforlunch #scrapstock #howtousescrapstock #vegetablestock #nothingwasted #vegetarianfood
An exceptional lunch. After bread for dinner on two consecutive days we needed "full meals". This season's first bitter gourd shukto and first Bengali meal. I went all-out Bengali and even roasted the mung dal before cooking it.👌🏼 Strangely, I learnt this from Divya @travelmeatsfood who roasts mung dal for pongal. It's just a light roast, don't roast till pink (which is where I was going wrong earlier). But it definitely elevated a plain mung dal flavoured simply today with cumin and sliced onions caramelized in ghee. . Shukto had karela, green banana, potato, beans, and bori in a fresh-ground paste made from whole coriander, mustard, and radhuni seeds; some ginger and a green chili. (Recipe in blog archives.) . Chorchori was pumpkin, potato, eggplant, beans, and pui in paanchphoron. Go to Sandeepa's blog @bongmom_cookbook for ideas. . Tamatar chutney was made last month with homegrown tomatoes - has jaggery, homemade mango vinegar, and homegrown chilies. (Recipe in blog archives.) . Potato peels bhaja - thick peels, diced fine, fried to a crisp on medium heat, and sprinkled with salt and red chili powder. I ate these for the first time at my Bengali collegemate's house. Yes, a long time ago. These really appealed to my frugal heart. Yup, always been that way; nothing to do with current Covid-situation. But alas, when I tried them at home all I got was bitter burnt peels. I was still a teenager with not much cooking under my belt. Yet the dish stayed in recurring memory. Years - decades - later, I realised what was needed were thick peels! 😆 So basic. Some things come only with experience. . . . #lunchthali #lunch #bengali #bengalifood #vegetarianfood #indianfood #growyourownfood #urbangarden #urbangardener #urbangardening #shukto #chorchori #dalchawal
First official Online Sourdough Bread Workshop - the faces say it all! We had it all from sticky dough all over the counter and hands, no DOs, to microwave ovens on convection mode, to batti gul! 😀 But we all got loaves we were proud of. What an intense two days in our own homes but with faces now familiar. . You can look back at this lockdown and feel a sense of achievement at building a starter, learning to take care of, and to finally taking the plunge and baking your very first Sourdough loaf. Happy baking, everyone! Let's bake this world a better place. . . . #amadteapartyworkshop #souroughbread #sourdoughbreadworkshop #online #sharethejoy #communalcooking #baking #breadbosses #firstloaf #firstbakes