Hot, hot. It’s a dry sauna in here! You could actually fry an egg on the sidewalk. And yet some things, native plants and creatures, thrive in this heat. At the moment, I am functioning with hardly any house-help. Kumari is away (for more than a month now) to her village in Bihar; Babloo, the presswala (for those who may not know, the chap who wields the “press” or iron, to iron our clothes!), also from Bihar, went away for a few weeks to make the most of his children’s summer vacations (he got back this morning!). He was also filling in for Chandu, who comes weekday mornings to wipe down the cars. So, I have had my hands more than full. The gardener, though in town, was a bit down in spirits, and there I was, watering the plants every other scorching evening. Yes, it doesn’t cool down even in the evenings. It become less hot, but never cool, till the monsoons arrive. No wonder we make so much song and dance about the Monsoon Season; yes, it is its own season – Saavan – in these parts, and much celebrated in Indian literature, paintings, and music.

On that first evening when I picked up the hose, I also decided to turn the pots to get even light on the less exposed sides. And, there was this tiny nest in the Ficus in the corner! The mystery of the chirpy tailorbirds every morning explained! I rotated the plant back, so that the nest continued to stay hidden. A few days later, I became the anxious “carer” not having spotted the parents birds all afternoon and believing the nest to have been abandoned. I took a peek, and there they were, four tiny hatchlings in the nest! Google came to the rescue as always and I researched on how many hours hatchlings can survive without parent attention. I learned, with a heavy heart, that it is best to leave them alone and not care for them even if they have been abandoned. Ah, but come evening, there she was, the mother tailorbird! All was well after all. I resolved to take no more peeks lest I scare the parents to abandon their babies. 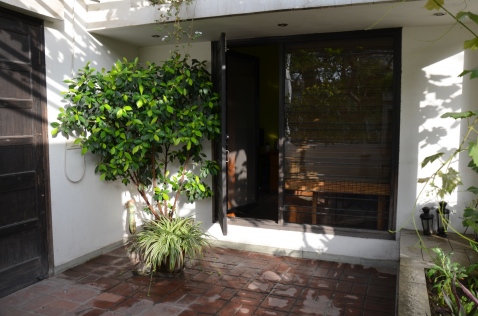 The last hatchling – in the nest 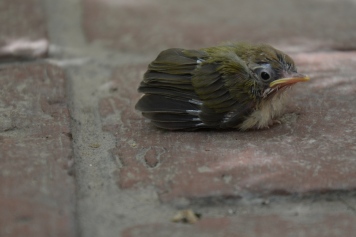 I believe I can fly!

A couple of days later I saw two baby birds sprawled under the tree with no parents in sight. These were still not at the fledgeling stage, not ready to spread their wings just yet. I crossed my fingers and piled them back into their nest. Two days later, there they were, two of them on the terrace floor, this time with some feathers visible. One moving about a little, and the other seemingly dying. It was a drop of a good four feet from the nest. In a few hours he seemed to have picked himself up and both were trying out their wings. One was still around the following day (or was it the third one?) hopping about till the gardener arrived and unleashed the chaos of activity around the poor little fledgling. Soon, there was no trace of it. The parents had, likely, scooped it out of potential harm’s way. Two days later, I took a peek at the nest, expecting to see a dead hatchling or two, which is quite normal. It is rare for the entire clutch to make it to maturity. No dead birds!

The squirrel up the Gulmohur (Flame Tree)

Bulbul on the Plumeria 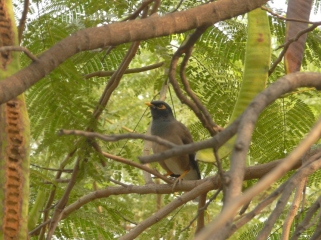 My terrace garden has proved a super-safe habitat for tiny birds! I still see adult tailorbirds hopping about in the grapevine. This year Bulbuls too, in addition to those pesky squirrels, have been feasting on the ripening grapes. Yesterday, I took down some ripened bunches from my heirloom vines. I’ll call them “heirloom” to make all of you envious, rather than saying that they have seeds. Giant seeds. Seeds the size of orange pips.

But, did you know that the grape-seed is full of antioxidants? The pulp contains just 10% of the flavonoids in a grape! The seed, the skin, and the pedicel (the little stem that attaches the grape to the main stem) contain the remaining 90%! Now, most of us, used to seedless grapes over time, can no longer enjoy the seed in the grape, and spitting them out also gets tedious after the first handful. I don’t think I am ready to try wine-making just yet. What I did with a small batch a couple of years back was to pickle them! Yes, grape pickle is for real! Made in the manner of the usual vinegar-based western pickles, they can stay in the refrigerator indefinitely. The best part of pickling my heirloom grapes is that with time the mouth-puckering taste of the grape seeds gives way to just a nice crunch which is great in sandwiches and salads! I get the goodness of the flavanoids and a condiment that is very, very out of the ordinary. The first time I had used only peppercorns to spice the pickle. But this time I went all out and piled them on including allspice (finally opened the packet I bought in Kerala, err, a couple of years ago?!) and chillies.

Here’s the recipe. Try to find grapes that have seeds, or grow a vine of your own. It is easy enough to grow, gives shade in the this awfully hot summer, and will also give you leaves to make dolmas! 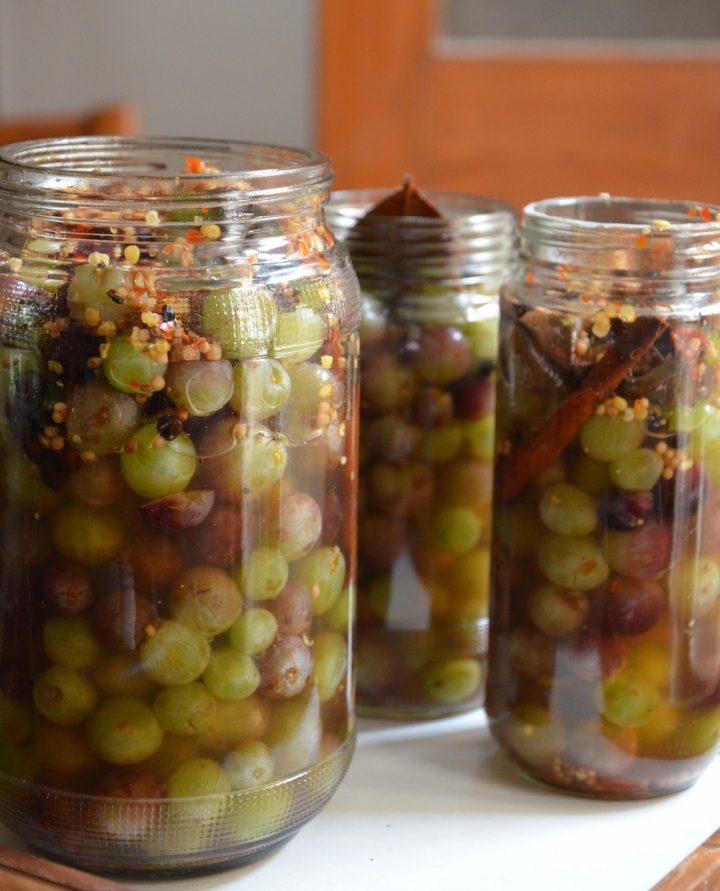 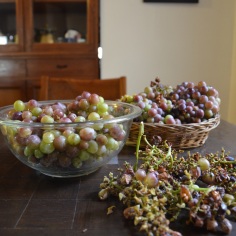 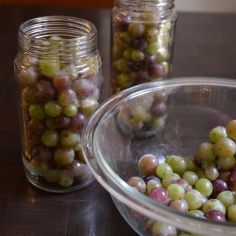 Rinse grapes and pluck them off the stems.  Some recipes recommend spearing the grapes, making a cross at the top, or taking a small slice off the top to allow the flavours to penetrate easily.  My grapes are so fresh and crisp that snapping them off the stem causes the skin to burst so I left them intact. [For my previous batch, I had halved them.] Fill clean glass jars (with plastic, not metal, lids) with prepared grapes. In a non-reactive pan heat the rest of the ingredients.  Simmer till the sugar has dissolved.  Let cool a few minutes before pouring into the jars to cover the grapes. Take care to distribute the spices that settle at the bottom proportionately between the jars.  Shake the jars to distribute the spices evenly.  Cool and refrigerate at least a couple of days before consuming. Slice up into sandwiches, add to salads (especially, potato salad), or serve as a snack with cheese. Thanks, Sangeeta, for correcting me on the taylorbirds and identifying the grape species as well.  Folks, these be Shiraz grapes! 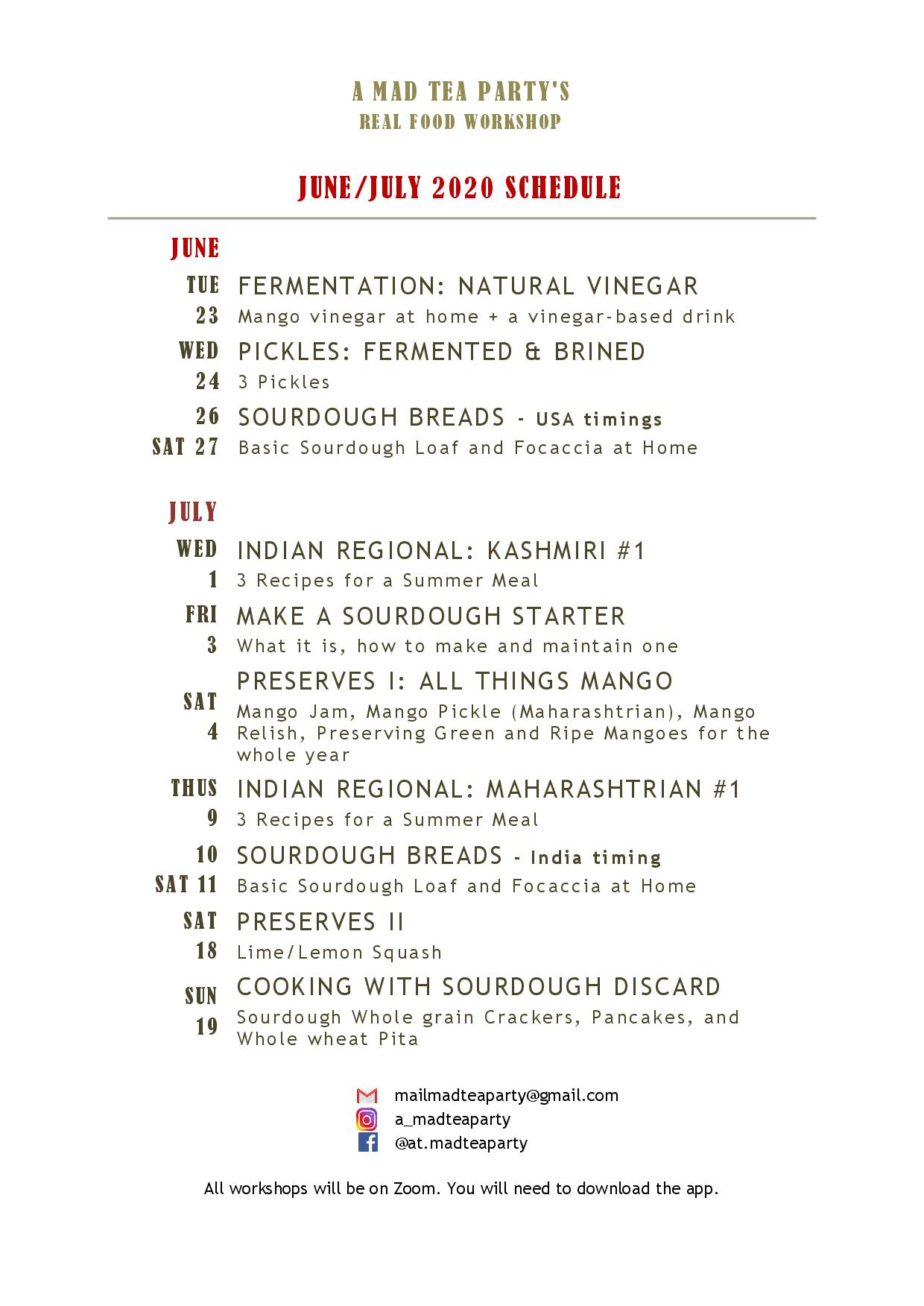 Bread Desserts Drinks Eating Out From the Garden Kashmiri Low Fat on the side Potatoes Preserves Punjab Ruminations and rants south Indian Tea Party This and That Traditions and Customs Travel Under 30 min! Vegetables Vegetarian