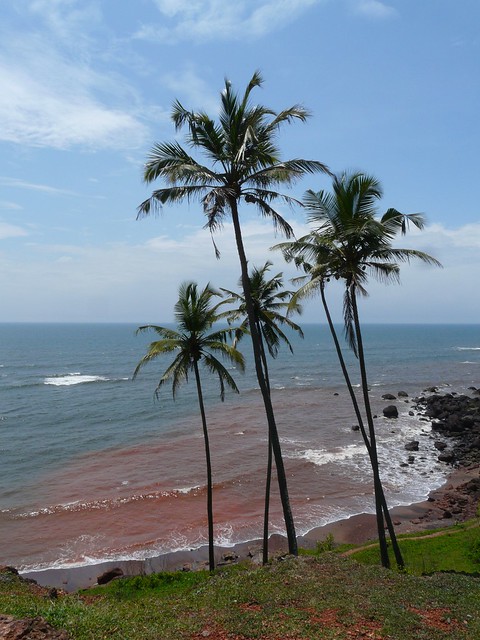 I have been traveling a lot the last few months.  About a month ago (or was it two?), one such work-related trip took me to Goa for a week.  Immediately upon arrival it was conveyed to the client that in the interest of the tourism-related nature of our project, it was imperative that we experience authentic Goa as much as possible.  We were to stay in Panjim but our sites criss-crossed the state and there was much opportunity to enjoy the landscape and local food.  I and my colleague Tushar were very lucky to have Sunil and Isha, ethnic Goans to boot, be our companions through the week who guided us through some fabulous Goan lunch menus as well as foodie shopping while making sure we started work early and stayed on the job late.

We got off to a great start, arrive as we did at lunch time.  I don’t seem to have pictures of that first lunch of pomfret fry and cafreal; it was too early in the meeting to whip out the camera at the sight of food I suppose.  We talked about food and Goan rice, and I let it slip that I write a food-blog. 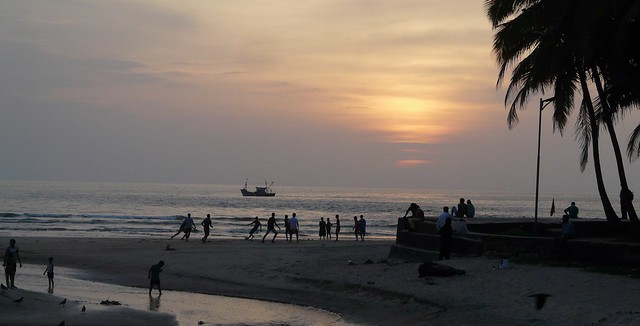 Many of the sites were by the beach but it was not tourist season yet, and the locals had the beach and the sea to themselves.  There is something about the sun setting over sea that gets to us and pictures are not always able to capture the full magic.

[I pick the thread up again, after a gap of a few (six!) months, and the memories less sharp…] 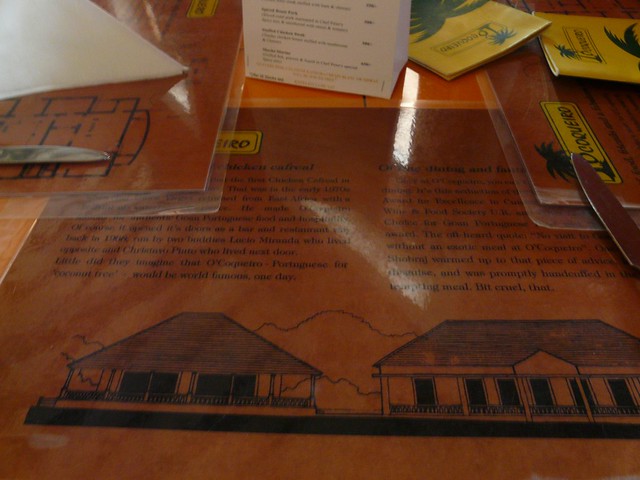 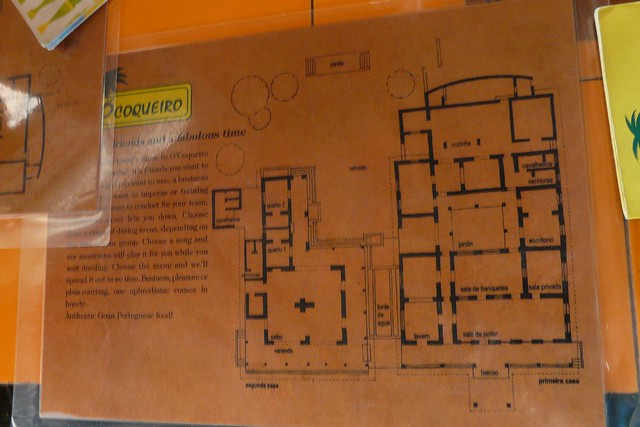 For lunch, another day, we visited O Coqueiro, Portuguese for “the coconut tree”.  It was past 2 o’clock and there were few people still at lunch.  The place mats looked interesting – plans and elevations of the house we were eating in, how could that fail to impress the architect in me! We were seated in the sala de jantar of primeira casa.  I took a look at Chef Peter’s Goan Specials on the table menu.  Samarachi curry, a Goan specialty made with sun-dried shrimp in coconut milk, was at the top.  I was hesitant, know as I well do how dried seafood can stink.  But Sunil, the native Goan Catholic, elaborated that it was a local favourite especially in the wet months when the catch from the sea is low.  I almost settled for the tried-and-tested caldinho but then decided to throw caution to the Goan monsoon winds which hadn’t died down quite yet. 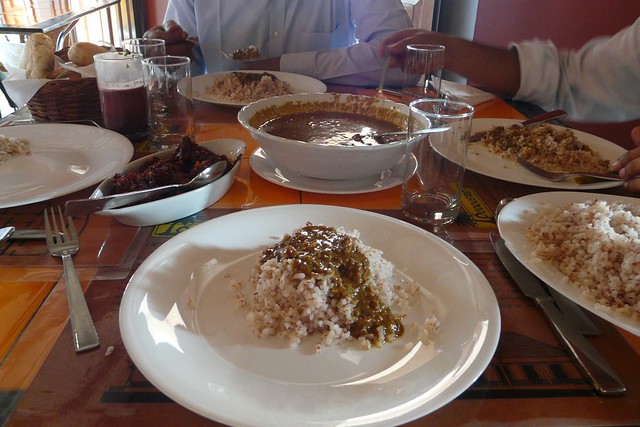 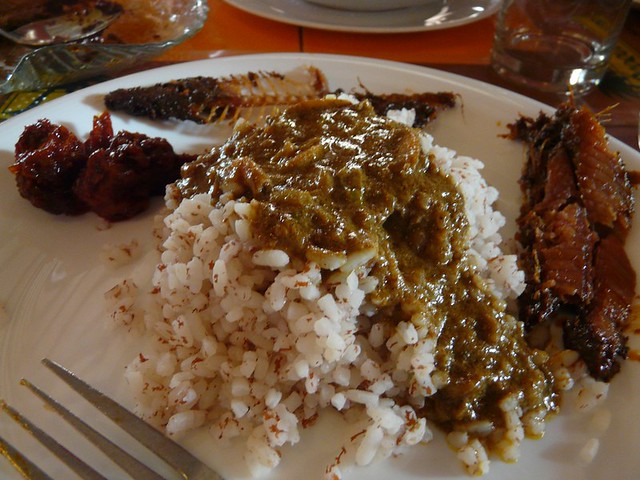 It is a most delicious curry and I could not have enough.  I would have packed the leftovers had I not had another few days to spend in the local hotel.   The pickled mackeral served on the side was intensely salty and vinegary, and complimented the curry well.  Samarachi kodi, in my opinion, is the best use yet for dried shrimp (some of which is still sitting in my other fridge).  I have been searching for a recipe since but there are few on the Web. I would like to research a bit before I try a less-familiar cuisine. I have just ordered a few (more!) Indian cookbooks this week…

A statue of Charles Sobraj, the famous fugitive, in the veranda of O’Coqueiro, where he was captured; the caramel custard didn’t make the cut for me

Isha ordered prawn racheado(?), memories of which are blurred.  To accompany the shrimp, she ordered poie, a local bread.  I cannot believe that even after quite a few visits to Goa, I was unaware of this amazingly soft, traditional wholewheat bread.  Its soft crumb is just made to soak up the coconut-ty Goan curries.  I fell in love with this bread and carried a dozen home, thanks to the generosity of Isha, who procured them for me from her regular podar on my last morning in Goa.  There are many types of Goan breads – pao, poie, and undde, each of them the domain of family bakers, a tradition that is under threat given the cheaper pricing of factory breads.  Presently, the price of poie is regulated with the podar receiving subsidised flour from the state.  I can only hope that these truly artisanal bakeries will somehow survive, thrive.  All they need is a ‘label’ (artisanal!); some fads aren’t bad.

Another memorable lunch at Viva Panjim 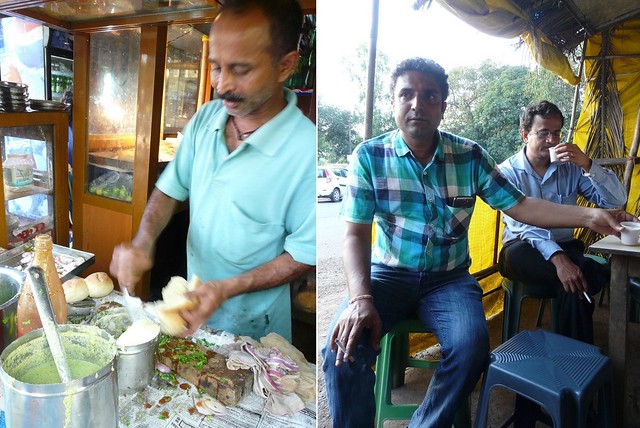 This vada-pao chap was just too fast for me; he really was a blur of motion as he stuffed the pao with the potato vada and myriad chutneys – a great pairing with road-side chai.

Housed inside the Sunaparanta Centre for the Arts in Panjim, is the charming Cafe al fresco, Bodega.  The ambiance of the Portuguese-style courtyard cafe, surrounded by galleries showcasing local artists, is the perfect setting for a relaxed cup of tea or coffee.  It is famous for its daily-changing sandwich menu, as well as cakes.  But remember to go there early; it closes at 7:00pm.  We barely managed to order our coffees as the employees soon set about upturning the chairs and  turning the lights off gradually, signalling politely the end of their day.

With that I leave you till the next time.  I do hope it will be soon.

7 thoughts on “A Goan Sojourn”

Bread Desserts Drinks Eating Out From the Garden Kashmiri Low Fat on the side Potatoes Preserves Punjab Ruminations and rants south Indian Tea Party This and That Traditions and Customs Travel Under 30 min! Vegetables Vegetarian
Santa Rosa Plums are a great plum variety to cook with. The sweet pulp and the tart skin combined with a little sinful sugar makes for quite the treat. After making a small batch of jam and another of hot plum chutney, I was dying to use them in a dessert, but the week just vanished in accomplishing the mundane.
June, the month of birthdays, is coming to an end. Based on the Hindu luni-solar calendar it was my son's birthday yesterday. My mother cooked the birthday specials - taher (yellow rice), with tcharvan-olu (goat liver with potatoes), and paneer (with tori) for the vegetarians. There was a time I would happily eat this for all the meals (including breakfast) for every birthday at home. I still could; it is comfort food 💯%.
It's time for Pizza at home! I had been meaning to organize this sooner but the summer just got away. Let's do this next weekend before it's back to school again. [Or is it back to school already because of all the lost days, thanks to COVID?] Let's not lose more time. Join me for almost-no-work best-pizzas-of-your-life and no-sweat-tomato-sauce at home with whatever you got - basic OTGs, rudimentary ovens, or even just stove-top + a blow torch (I kid you not!). 😀 Not to mention a morning of happy cooking together with the fam (unless you're not into that, that's cool too. You're worth it, just you alone.)
%d bloggers like this: