There is this chunky peanut chutney from the Marathwada region of Maharashtra that’s a bit like a well-kept secret, a hidden gem, in a plethora of side dishes served all over Western and Southern India. Maharashtra has a portion of the thali reserved for these itsy-bitsy additions to the daily meal that make them special. Davi kadey, Marathi for on-the left-side, is the side of the thali reserved for a multitude of condiments, from salt to pickles, from a wedge of lime to chutneys of all kinds, a side that is almost completely missing in my Kashmiri thali. Exceptions only prove the rule. I think we allowed rice to find its way into that corner as well.

END_OF_DOCUMENT_TOKEN_TO_BE_REPLACED

Up until last month my travels through the Middle East had been restricted to the airports of some of the bigger cities there – Dubai, Doha, and Abu Dhabi – when flying back and forth between the US and Delhi during my 3 years of grad school. But earlier this month I got an opportunity to visit Jordan and it became my window to the Arabic world.

For neighbours it has Syria, Iraq, and Israel, countries associated with war and disturbance. The region that was once the Cradle of Civilization might as well be called the cradle of instability today. Murmurs within the family doubting the wisdom of my choice for travel were only natural with even the son voicing concern (wow, he’s all grown up!).

And here I am, after spending a week in the gorgeous desert country of Jordan to tell you that it is as safe as traveling to those places for which there are no advisories. The people there are friendly, most speak English, there is lots of fresh vegetarian food to chose from (yes, I do prefer to eat mostly vegetarian), and the US Dollar is as legit as the Jordanian Dinar. Mental conversion is also quick and easy for us Indians; 1JD=₹100!

We took off on an early morning AirArabia* flight and arrived at the Queen Alia International Airport (Amman) via Sharjah absolutely sleep deprived. There was no time to waste. A quick shower fixed us up for the moment and we reported promptly for lunch. We were spoiled for choice at the lavish buffet lunch at the Crown Plaza Amman. The centerpiece of the spread was a pilaf – lamb shoulder with rice. But before that I piled my plate with all the mezze fixings – got to eat your salads first! There was an entire counter devoted to pickles – imagine my delight. Pickled olives, chillies, cucumbers, gerkins, and even eggplant stuffed with chillies! The black olives on offer here were surely the best on the trip. END_OF_DOCUMENT_TOKEN_TO_BE_REPLACED

Time was flying. Mornings would roll easy in endless cups of tea. We cooked together a little bit: the flan, and some mutsch, and drank more tea in between, including a tisane made with wild roses and linden blossoms and bracts foraged and generously shared by her friend. Linden blossoms can also be used in much the same way as calamondins to make a liqueur.

On our second, and last weekend in Colorado, we headed to Winter Park. Medha had picked a test-center near Winter Park and she and D had left a day earlier so that she could take her test and still be able to spend the weekend with us. 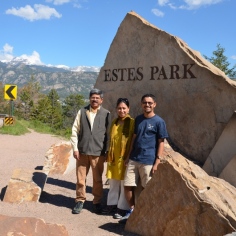 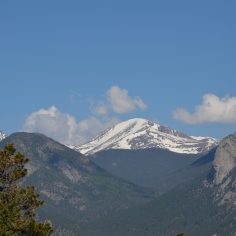 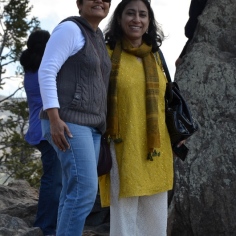 At Many Parks Curve

All of Boulder was out on their cycles that day for a race and we kept at a safe distance from them all.  The scenic Trail Ridge Road took us into the Rocky Mountain National Parks at Estes Park. The entry sign here, also known as Patel Point to some, was our first photo opp. We checked off the Beaver Meadows Visitor Center, a National Landmark site, designed by Frank Llyod Wright’s office Taliesin Associated Architects, following his death. The visitor center also plays tribute to conservationist Stephen Mather who led a public campaign that was instrumental in the setting up of the US National Park Service in 1916.

END_OF_DOCUMENT_TOKEN_TO_BE_REPLACED 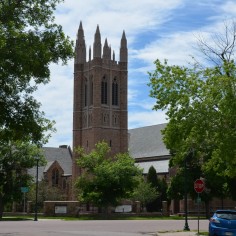 At the Garden of the Gods

[Continued from the previous post]
The next morning Andrea graciously offered to drive us through the Garden of the Gods before dropping us off at Jim’s office downtown. Kristin was driving up from Denver to pick us up. She, her husband Paul, Jim, and I, had been classmates at KSU and later Paul and I ended up working together in Denver. Today they own a successful design firm that is doing impressive work in and around Denver. It was so good to note that not only were all of us make a living out of what we had trained to do but also that we loved doing it!

Paying homage to Michael Graves at the DPL 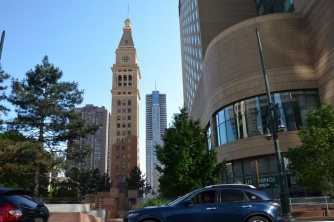 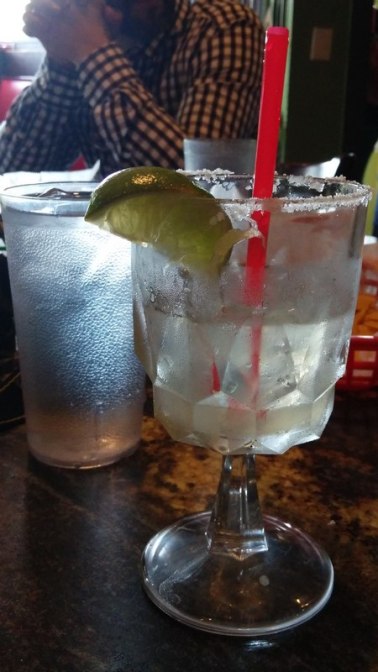 In Denver, Paul and Kristin took us down memory lane, literally. Together we drove to some of the once-familiar places including the little garage-unit at Corona and 11th (it had it’s own fractional address: 1125 1/2!) that had been my home, and the office at Cherokee and 11th. By the time we were through it was too late for a Japanese country-style lunch at Domo’s, which had been a favourite with the office bunch. So we went to Benny’s for Mexican instead – chimichangas and margaritas it was. Later we hung out at the City Center Cultural Complex with quick visits to the Denver Public Library, the Capitol Plaza, and the Denver Art Museum before catching the bus to Louisville from the all-new Union Station.
END_OF_DOCUMENT_TOKEN_TO_BE_REPLACED

Bread Desserts Drinks Eating Out From the Garden Kashmiri Low Fat on the side Potatoes Preserves Punjab Ruminations and rants south Indian Tea Party This and That Traditions and Customs Travel Under 30 min! Vegetables Vegetarian
Is your discard jar full to the brim now? Never ever throw any away. It can stay in the refrigerator for a very long time. I mean months. But here's a simple recipe (as always!) that needs not much else and is one of the best ways to use up a lot of discard. . Make these ahead and let them cool. They freeze well. Always toast before serving. . Serve the #crumpets with butter and jam. If you didn't manage to get hold of a jar of my incredible marmalade, well, do the next best thing. Make a little instant jam by cooking any fruit you have (or even sliced limes or tomatoes!) with a little sugar till it's all nice and thick and you're good to go. A detailed recipe for Lime Marmalade is in the blog archives 😊. . If you missed the IG live session, here's the recipe for Sourdough Crumpets (serves 2) . 1 C sourdough discard 1t raw sugar (or any sugar) 1/4 t salt 1/4t baking soda . Whisk everything together and let rest for 10min. Meanwhile heat a heavy (CI) pan. Smear the hot pan with a little butter and wipe with a kitchen towel. Lower the heat to medium-low. Place a buttered ring (or cookie cutter) on the pan and pour in a ladleful of the batter. [If you don't have any metal rings, you may make them freeform and call them pikelets.] . Let cook on a low heat till the surface is covered with little bubbles and looks almost dry. Remove the ring and flip. Cook till golden on the other side as well. . Remove. Repeat. Cool. [Freeze.] Toast and serve with butter and jam. Or malai. Or podi. Or pickle. . . . #nothingwasted #sourdoughcrumpets #sourdoughdiscardrecipe #simplerecipes #pikelets #crumpets #sourdough #delhisourdough
Our lunch today: chana dal-doodhi, a side of Andhra-style stir fried beans (leftover from dinner), doodhi peel relish, served with rice and a side of salad. . A frugal meal to stretch resources you may think. But we've always cooked like this. Those of you in your 20s and 30s have to only look towards your mothers who will tell you, yes, that is how we cooked, ate, and lived just a few decades ago. When sustainability was not a buzz word but a way of life. After this pandemic is done the world will never be the same. Or so I hope. I hope more of us will reflect on where we were going and where we have come. Humans have awfully short memories though. . For the doodhi/lauki/bottle gourd peel chutney refer to blog archives (temp link in stories). Homegrown ingredients in today's meal: tomatoes, lettuce, hyacinth beans, curry leaves, mustard seeds (💪🏼), and green chilies (from the freezer). . @rajeswaribonala Raji's recipe for the beans was refreshingly different - spicy (chilies), tangy (tamarind), with a nice hint of sweet (jaggery). So good. . Keeping it simple. . . . #simplecooking #simplelife #thefrugalcook #simplemeals #hyacinthbeans #chanadal #bottlegourd #axesoup #kulhadikadaliya
Is your Sourdough discard beginning to pile up? I have just the recipe for you! (Step by step in stories.) . Sourdough discard cheelas, our lunch 2 days ago. Served with caronda-hari mirch pickle (N Indian), peanut chutney from Marathwada, and thenga podi (Andhra), and a side of salad. . Approximate quantities, don't need to be exact: 1 C starter discard 1/4 C bajra 1/3 C jowar flour Whey water, buttermilk, or tap water to make a batter Salt, turmeric, red chilli powder 1/2 t baking soda . Make a thick pouring-consistency batter. Let sit for a couple of hours. Whisk in baking soda and let sit for 10min. . Pour by ladlefuls into a greased hot pan. Drizzle a little oil on the edges. When the surface is covered with little holes, flip over and cook the other side till crisp. Serve hot with chutneys and pickles of your choice. . . . #sourdoughdiscardrecipe #breakfastpancakes #cheela #naturallyleavened #fermentedfoods